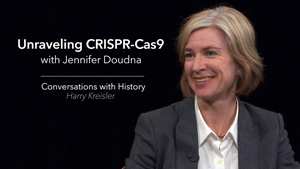 Jennifer Doudna is a leader in the CRISPR revolution. This new technology is a gene editing tool that manipulates DNA within organisms. The editing process has a wide variety of applications including correcting genetic defects, treating and preventing the spread of diseases and improving crops.

Doudna, Professor of Biochemistry, Biophysics and Structural Biology at UC Berkeley, sat down to talk with Harry Kreisler about her life and how she came to be involved in this amazing discovery.

They also discuss how education and public advocacy can broaden insight into the ethical and policy dimensions of the biological revolution that is upon us. In these lively and unedited interviews, UC Berkeley’s Harry Kreisler welcomes distinguished men and women from all over the world to talk about their lives and their work. Interviews span the globe and include discussion of political, economic, military, legal, cultural, and social issues shaping our world. Harry recently competed his 500th interview, each an in-depth look at the guest’s life from childhood through to the present day. Check out the most recent additions to the UCTV archive.

Leadership with Gro Harlem Brundtland
Gro Harlem Brundtland discusses of her lifelong commitment to public service at the national and international level. She traces her intellectual odyssey and recalls her many roles – Norwegian Prime Minister, Chair of Global Commission on Environment and Development, and Director General of the World Health Organization.

Political Theory and Social Criticism with Michael Walzer
One of America’s foremost political thinkers Walzer explores his childhood, education and writing. He talks about the protest movement of the 60s and looks at the 2008 economic collapse from the perspective of a social critic.

Understanding Human Nature with Steven Pinker
Harvard psychology professor Pinker conducts research on language and cognition. He discusses growing up in Montreal, the impact of the 1960’s and the trajectory of his research interests. He explains his early work in linguistics and how he came to write his recent work, “The Better Angels of Our Nature: Why Violence Has Declined.”

Scientific Discovery with Carol Greider
Carol Greider shared the Nobel Prize in Physiology or Medicine in 2009 for the discovery of how chromosomes are protected by telomeres and the enzyme telomerase. She explores what it means to be the daughter of a physics professor and her journey to the Nobel Prize.

Technology and Inequality with George Packer
New Yorker staff writer George Packer discuses of the impact of Silicon Valley on society and politics. He explores the implications of technology for the status of the American worker, for American culture, and for economic inequality.

History, Politics and Law with Charles McCurdy
Professor of History and Law at the University of Virginia, Charles McCurdy discusses the interactions of law and politics in the United States. Case studies discussed include: Justice Stephen Field; The Anti- Rent Era in New York Law (1830-1865); Herbert Wechsler’s article on “The Political Safeguards of Federalism;” and the Sedition Acts of the 1790’s.

The Rise and Fall of Cultural Groups in America with Amy Chua and Jed Rubenfeld
Amy Chua attracted a lot of attention with her book “Battle Hymn of the Tiger Mother.” She and her husband, fellow Yale Law School Professor Jed Rubenfeld, have written a new book, “The Triple Package” in which they explain the rise and fall of certain cultural groups, primarily, second generation recent immigrants to the U.S.