Mariachi Over the Rainbow 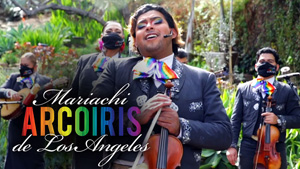 The group prides itself on being the world’s first LGBTQ mariachi band. Their tight, energetic, and intricate sound has been honed by the work they’ve had to do to navigate the typically hypermasculine and heteronormative world of mariachi as gay and trans musicians.

Of course, the group’s social power would be nothing if their music-making were not at a high level. Their dual mission of being a respected musical group and advocating for social equality for the LGBTQ community has won the hearts and minds of many mariachi enthusiasts.

The band has performed at numerous gay and transgender pride events as well as the #SchoolsNotPrisons tour for the California Endowment. They have been featured multiple times on Univision morning shows, and highlighted many times in the press.