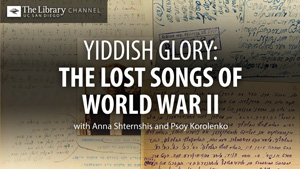 In the midst of World War II ethnomusicologist Moisei Beregovsky led a group of scholars who discovered songs written by Jewish Red Army soldiers, refugees, victims, and survivors of Ukrainian ghettos and camps. These were people whose voices are rarely heard in reconstructing history; none were professional writers, poets, or musicians, but nevertheless all were unwillingly at the center of the most important historical event of the 20th century and attempted to make sense of the horrors through music.

The researchers were arrested during Stalin’s anti-Jewish purge following the war. The songs they’d collected were thought to be destroyed until discovered in unmarked boxes stored in the archives of the Vernadsky National Library of Ukraine in the 1990s. On a trip to Ukraine in the early 2000s Yiddish Professor Anna Shternshis first encountered these fragile documents and recognized them as some of the most poignant and historically significant documents of World War II. Many were first-hand, grassroots testimonies of Nazi atrocities against Jews, detailing brutal massacres at Babi Yar and others places in Ukraine. These raw emotional ballads convey pain, despair, hope, humor, courage, resistance, and revenge.

Artist Psoy Korolenko and Professor Shternshis subsequently undertook a remarkable collaboration that aimed to bring the songs to life for the first time in decades. Few of the archival documents had their melodies preserved; most were simply lyrics written on small scraps of paper. Korolenko engaged in “musical archaeology” by analyzing the scarce supplementary notes, contextualizing the lyrics, and employing his prodigious imagination to create or adapt music for the texts. In the UCSD-TV program Yiddish Glory: The Lost Songs of World War II, Korolenko performs several songs while Professor Shternshis describes the grim context in which they were created.

To help gain wider recognition for the songs a distinguished ensemble of soloists from the worlds of classical, folk and jazz joined with five vocalists and five conservatory-trained instrumentalists to record Korolenko’s adaptations. The result of this three-year long process was the album Yiddish Glory, released in 2018. The album is not just a remarkable musical achievement but also a work of historical and sociological importance. It is a time capsule that reveals how Jewish men, women, and children fought against fascism, strove against all odds to save their families, and in their final moments chose to reveal their hopes and dreams through music.

For the first time since the war the public could hear the voices of Soviet Jews who would otherwise have been lost to history, silenced by Hitler and Stalin.