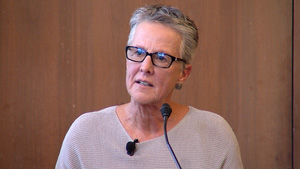 The world is seeing a rise in far-right politics, from Italy, to France, to Brexit, to President Trump. So, how did we get here? And, where exactly are we? Is this authoritarianism, fascism, populism, or something else? These are the questions political theorist Wendy Brown addresses in her talk, Neoliberalism’s Scorpion Tail: Markets and Morals Where Democracy Once Was.

Brown begins by outlining what she sees as the classical liberal thinking on the subject. The story goes like this: neoliberal economic policies devastated rural and suburban areas taking away decent jobs, pensions, schools, services and infrastructure as social spending dried up, and capital began to chase cheap labor and tax havens in the global south. At the same time, a cultural gap grew between those rural and suburban communities, and urban centers. Rural families were alienated, left behind, and felt like strangers in their own land. This feeling was coupled with enduring racism as immigrant communities transformed some suburban neighborhoods and the politics of equality appeared to the uneducated white male, to favor everyone but him.

Brown says that story is incomplete. She argues it fails to address a key component of neoliberalism: the idea that society and robust democracy disrupt the natural hierarchy of markets and traditional morals. Brown argues that classical neoliberalism seeks to disintegrate society and universal suffrage, leading to a world where those who were historically dominant – the white male in particular – feel that dominance fade. What is left, are feelings of rage and resentment. Brown imagines two possible futures for those feelings, one bleaker than the next. First, she describes world in which politics are based solely on spite and revenge. The second option? A reversal of values, where those who have lost the world they feel historically entitled to seek to destroy it. But, she leaves some room for hope if humanity can draw deeply from our imaginations, courage and grit.

Watch Neoliberalism’s Scorpion Tail: Markets and Morals Where Democracy Once Was