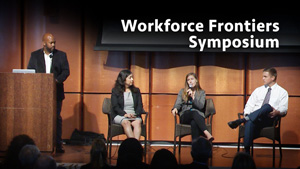 We know that the future of work is upon us–AI, robotics, global markets and online innovations are driving massive changes. So, what about workforce development? This event explores the boundary-busting, outer reaches of workforce development where job quality, equity, outcomes and opportunity take center stage.

The program is presented by The San Diego Workforce Partnership which is committed to advancing new ideas and trailblazing daily to remain on the cutting edge of these critical shifts that shape how we work and thrive.

California’s dubious ranking as the state with the most foreclosures is matched in its grimness by recent bankruptcy declarations by San Bernardino, Stockton and Mammoth Lakes, continued declines in property and sales tax revenues, and massive unfunded liabilities in public worker pension plans.

To address these issues and a host of intertwined financial concerns, the University of California, Berkeley’s Institute of Governmental Studies (IGS) brought together players in government, labor, finance and public policy for an all-day conference last month, during which they explored “California’s Fiscal Crisis: Prospects for Deficit Reduction and Pension Reform in the Golden State.”

The six panel discussions, available this month on UCTV, include everyone from labor leaders to the chief economist at Moody’s Analytics. These diverse voices examine the severity of the crisis; possible paths to reform; the politics, principles and laws governing municipal financial restructuring;  issues such as outsourcing, public-private partnerships and how to deal with credit markets; and the efficacy of pension reforms, including those just signed into law by Gov. Jerry Brown.

You can find these and other programs at the IGS series page on the UCTV website. Get informed!

As producer of “Prime: Vote,” the political is personal for me as I now have the great opportunity to interview the smartest minds in the University of California system about the 2012 election.  A dream come true!

Next up in the series is “Political Messaging on the Economy” with Lynn Vavreck of UCLA and Thad Kousser of UC San Diego.  These two political scientists examine how Mitt Romney, Rick Santorum and Barack Obama are crafting their economic messages to appeal to voters.  All three candidates began this campaign in a weak economy. But with signs of recovery, should they adjust their strategies?  Vavreck and Kousser join me for some smart talk on this timely topic.  Check it out. We know, we know. You’re probably on election coverage overload. But what if you could get more than just the typical “horse race” coverage? What if you could find reasoned, rational discussion — backed by academic research– on issues being raised in the public debate?

The series debuts today with commentary by Peter Gourevitch, political scientist and founding dean of the School of International Relations and Pacific Studies at UC San Diego, who comes down on the side of spending over austerity to address the national debt and boost the economy.

And come back this Friday (March 16) for more commentary on “Prime: Vote,” including “Incumbents, Are You Listening?” from UC Merced’s Jessica Trounstine, who describes factors that encourage incumbents to listen to voters, and “The Case for Immigration,” by UC Davis economist Giovanni Peri.

In April, “Prime: Vote” debuts timely interviews with UC faculty who can provide context to the rough and tumble journey along the campaign trail.  The first interview premieres April 3 with Lynn Vavreck, a UCLA political scientist and recognized expert in political messaging.

Is there something you’ve been wondering about related to political messaging? Send your question to us and we just might pose it to Professor Vavreck during our upcoming interview. Just email your question to prime@uctv.tv by Noon (Pacific) on March 21, and please include your name, city and state, along with your question.