A Fascination with Trees 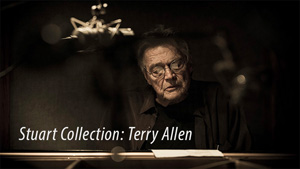 When Terry Allen left Lubbock, Texas to pursue his youthful ambitions it’s doubtful he could have foreseen his status nearly six decades later as a legendary painter, conceptual artist, composer, and musician. Terry’s work is unusually diverse but certain themes are common: the mysteries of love, surviving loss, and the consequences of violence are just a few, often expressed with sardonic humor and a heightened sense of irony.

Terry is particularly celebrated as a chronicler of the off-beat, the surreal, and the just plain weird in American life. In his interview with the Stuart Collection’s Mary Beebe and Mathieu Gregoire, Terry notes that his appreciation for the off-kilter arose in part from his childhood in Lubbock, a highly conservative place with its share of colorful and disreputable characters. A burgeoning iconoclast, he fled Lubbock for Los Angeles in the mid-1960s seeking to establish himself as an artist. It was only after disavowing Lubbock and West Texas for many years that Terry came to appreciate the influence of his upbringing on his worldview and his art. This understanding was beautifully expressed in his groundbreaking 1979 release “Lubbock (On Everything)” which contains two of Your Humble Correspondent’s favorites, “Truckload of Art” and “The Collector (and the Art Mob).” “Lubbock…” along with his earlier conceptual album “Juarez” cemented Terry Allen’s reputation as an “outlaw country” artist, a designation he’s not comfortable with as he finds it limiting, if not meaningless.

Terry also discusses his fascination with trees, understandable in someone growing up in a place “so flat that if you stare at the horizon hard enough you can see the back of your head.” This attraction inspired his creation of a commission for Stuart Collection entitled “Trees,” a collection of three metal-clad trees: a singing tree that plays an eclectic mixture of music; a talking (or poetry) tree that plays various spoken word pieces; and a silent tree placed in front of UC San Diego’s Geisel Library. The singing and talking trees are blended into a eucalyptus grove, lending an air of both mystery and discovery to the passersby. As with many of the Stuart Collection pieces, the objective is to “bring the inexplicable” to campus, and Terry Allen is well-versed in the enigmatic.