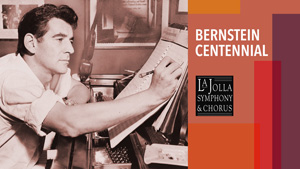 At first glance, this concert program seems like a straightforward juxtaposition of light and dark: we have Leonard Bernstein’s magnificent Kaddish —his prayer for the dead— and, on the other hand, Beethoven’s genial Eighth Symphony. Tying them together— metaphorically if not musically—is Laurie San Martin’s evocatively titled, nights bright days.

As is the case with other concerts in the Symphony’s 2018/2019 “Lineage” season, those juxtapositions are more complex than is evident at first encounter.

Leonard Bernstein’s Third Symphony takes its name, Kaddish, from the Jewish hymns of praise to God. Interestingly, though frequently associated in the popular imagination with Jewish mourning rituals the word and/or concept of death is never mentioned in the text; rather, the intention is to express a continued commitment to life (chayim) and faith in God in the face of overwhelming loss. Bernstein’s music moves metaphorically through the well-known stages of grief, at times lyrical and serene and at others discordant and tempestuous, reflecting the struggles of post-Holocaust Jews to maintain their core identity and beliefs while reaching an accommodation with an often-hostile world. Bernstein dedicated this piece to the memory of President John F. Kennedy, whom Bernstein had befriended at Harvard and who was assassinated three weeks before Kaddish’s premiere. The dedication bestowed a universal sense of sorrow, mingled with hope, upon a work rooted in Jewish tradition.

The contrasts most evident in Ludwig van Beethoven’s Symphony No. 8 are with that composer’s other symphonies and the fraught circumstances of his life. The Eighth is Beethoven’s shortest symphony and the one which most closely adheres to classical norms as established by Haydn and Mozart. In comparison to his better-known symphonies, most notably the Fifth and epochal Ninth, the Eighth (which Beethoven called “my little symphony in F”) is jovial, light on its feet, and even – dare I say it – humorous. This is all the more remarkable considering that at the time he wrote it Beethoven was grappling with deafness, his estrangement from his nephew, and unrequited love. Perhaps the composer was seeking solace in familiar forms, but whatever Beethoven’s motivations his Symphony No. 8 stands as a beacon of clarity in turbulent times, both Beethoven’s and ours.

All days are nights to see till I see thee,
And nights bright days when dreams do show thee me.

San Martin notes that she wrote this piece in the middle of the night, and like Bernstein’s Kaddish, nights bright days contrasts light with dark, tranquility with anguish. The small hours of the morning are frequently a time for uncertainty mixed with reflection, with the approaching dawn promising the possibility of, if not resolution, perhaps a renewed sense of confidence.