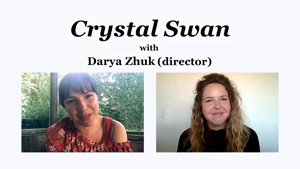 Writer-Director Darya Zhuk’s debut film Crystal Swan (2018) centers around Velya, a young woman seeking to escape the miserable conformity of life in Belarus in 1996. Velya is an aspiring DJ whose house music provides some much-needed escapism, but like many others her age she dreams of fleeing to America—or perhaps more accurately, a fantasy America where every teen has their own bedroom and cell phone and parents knock before they enter. That’s not Velya’s life in Minsk, where she must contend with an overbearing mother, little money, few job prospects, and the general post-communism malaise.

In this “tragic comedy” Velya schemes to obtain a visa from the American embassy, which involves faking a work phone number and other machinations. Velya learns to her dismay that the embassy intends to call that number to verify her employment and other details. Through a series of misadventures she ends up spending the next two days with the dysfunctional family that actually owns the telephone number, trying to convince them to lie for her when the embassy calls. As you might expect, the presence of a weird girl from Minsk trying to use the family so she can flee to Chicago leads to an increasing number of complications, not all of them comic.

In the best tradition of Eastern European literature and cinema, Zhuk tells a tale of desolate realism colored by farcical and absurdist elements (think Good Soldier Svejk or Milos Forman). Her film is set at a time of turmoil in Belarus, as the fledgling post-Soviet democracy succumbed to dictatorship. This ethos is mirrored in Zhuk’s protagonist, a young woman faced with a bleak future if she doesn’t make a run for it, and quickly. In telling her story Crystal Swan makes astute use of mid-1990s iconography; pre-digital cameras and phones (including phone booths), large posters on teenagers’ walls, cassette mix tapes handed from person to person, VHS tapes that jam in the VCR, and a pervasive, almost repressive, sense of materiality. It’s as if the accumulation of mundane objects provides an antidote to the wretchedness of everyday life. When these objects break down or lose their allure our heroine is forced to seize other possibilities.

As the film charts its course from the ironies and absurdities of the opening scenes to a bracing grittiness, it makes no guarantees for Velya’s successful escape nor for her happiness if she does. Darya Zhuk made her own successful escape and is now based in New York City, where she attended Columbia University, and Crystal Swan reflects memories of her own immigrant hopes as inextricably mingled with the uncertainties of forging a new life in a strange country.