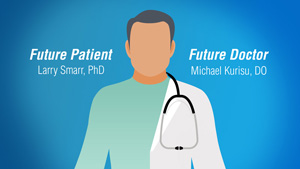 Larry Smarr is defining the future of healthcare. As he, a world-renowned computer scientist and Michael Kurisu, the much-in-demand osteopathic physician at UC San Diego demonstrate, the balance of power between patients and doctors will change as technology gives patients the tools to know more about their own bodies. And the more informed they become, the more likely they will work with their doctors to develop treatment and prevention plans that are appropriate for them. Using Smarr as a case study, this patient and doctor show the benefits of hands-on, systems-based thinking in treating sciatica and self-diagnosing Crohn’s disease. Kurisu then takes these concepts to Project Apollo, a group of highly educated and motivated patients who call themselves “Little Larry’s” as they use the same techniques to address and treat their own health problems. All of this pointing to what theologian and physician Albert Schweitzer envisioned in the last century, “the doctor of the future will be one self.” Smarr and Kurisu are showing us how.