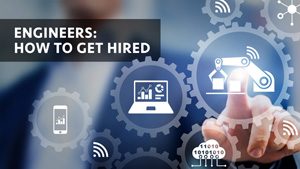 Getting hired is hard. From finding the right position, to getting a call back, to acing the interview – each step presents its own challenge. There is so much advice out there, but who better to listen to than two senior level managers at San Diego companies?

Silvia De Dea from ASML and Janet Koenig from Cubic Transportation Systems sat down with Startup San Diego’s Neal Bloom to share their insights into getting hired, and growing your career. In addition to great technical skills, both agree communication is more important now than ever before. Koenig and De Dea go into detail about how you can show off your communication skills, even if you’re an introvert, by properly preparing for your interview. In this enlightening conversation, the pair also discusses how to advance your career, while staying open to new opportunities.

Watch Getting Hired: A Manager’s Perspective – Career Transitions in Engineering: Insights from the Field Ever dream of creating an army of robots to do your bidding? Do you find yourself tinkering with everyday objects? Just want to have a little fun and learn a new skill? Welcome to the Qualcomm Thinkabit Lab!

Join engineer Saura Naderi as she shares the basics of coding, engineering, and creativity through simple projects you can do at home. Each video provides a list of easy to gather gear and a straightforward lesson on how to complete the project. Make an LED blink, get a servo to spin and learn a bit about the process of engineering.

Watch these programs and more on The STEAM Channel! With “Unleashing the Light,” the third video in the series, we look back on Nakamura’s breakthrough which enabled the creation of the white-light emitting LED, a crucial discovery that unleashed a revolution in the way the world uses light and power.

Watch “Unleashing the Light” or visit the “Lighting the World” series page to catch up on earlier episodes. We take light for granted, yet more than two billion people in the world go through their entire lives without reliable lighting.

But that’s changing, thanks in part to the brilliant discovery of UC Santa Barbara’s Shuji Nakamura.

UCTV Prime‘s new four-part series, Lighting the World: Shuji Nakamura and His Brilliant Discovery, made possible by UC Santa Barbara’s Solid State Lighting and Energy Center, tells the story of Nakamura’s determined effort to develop the white LED and the revolution in lighting that his discovery has brought to the world.

In the first short episode, “Lights in the Darkness,”  John Bowers of UC Santa Barbara’s Institute for Energy Efficiency describes the impact that lack of reliable lighting has on people’s lives. But he also shines some hope on the situation by showing how the use of highly efficient white LED, discovered by Shuji Nakamura, is proving to be a feasible and economical solution.

Watch “Lights in the Darkness” now and stay tuned this Friday (March 1) for the second installment of Lighting the World: Shuji Nakamura and His Brilliant Discovery.