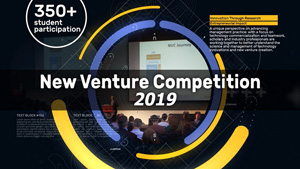 What if you never had to enter another password or unlock another door for the rest of your life? That’s the promise behind Allthenticate, one of six finalists in the annual UCSB New Venture Competition. The competition features teams of undergraduate and graduate students from UCSB’s Technology Management program. The teams spend eight months working on their projects before presenting them to a panel of entrepreneurs and successful business leaders.

This year’s finalists were: Allthenticate, a mobile-based security solution to keep companies and employees safe from both hackers and thieves; EnterVIEW, a software platform designed to make the job hunt easier for candidates and companies; Guniea Gig, an application aimed at creating a central database for university research studies; MicroPrint, a highly innovative printing process which will soon enable every device you own to be powered by Micro LEDs; Selva, an on-line marketplace that connects textile mills with apparel companies to facilitate the sale and usage of deadstock (excess) fabric; and The Hurd Co, a more sustainable pulp feedstock for textile production from cannabis waste.

Learn more about these upcoming companies and see who takes home the top prize. Get an up-close look at ground-breaking research and innovative technology from UCSB. Geared towards the community, these talks present the best minds from UCSB covering a wide-range of topics in science, medicine, technology and more. Check out these recent programs:

The Challenges That Society Brings to Engineering Designs
Understand the unique challenges that surface when seeking to design and control physical infrastructure such as transportation networks, power grids and data centers.

Why Antibiotics Fail – People Are Not Petri Plates
The standard antibiotic test used worldwide is based on how well drugs kill bacteria on petri plates — not in the body. Drugs that pass the standard test often fail to treat bacterial infections, whereas drugs identified by the “in vivo” test are very effective.

How Biology, Ecology, and Technology Balance Tradeoffs in an Uncertain World
Do complex systems exhibit fundamental properties? This talk looks at tradeoffs between robustness and fragility that occur in biological, ecological, and technological systems.

From Bitcoin to Central Bank Digital Currencies
Rod Garratt, UCSB Professor of Economics, describes his work on a project to build a proof of concept for a wholesale interbank payment system that facilitates payments of central bank digital currency using a distributed ledger.

Overcoming Climate Anxiety at a Time of Global Crisis
Debora Iglesias-Rodriguez discusses how humans can contribute to improving current ocean problems and eventually return the oceans to a more sustainable state.

The Remarkable Learning Abilities of the Human Brain
Greg Ashby studies how people learn new categories of objects. By mapping the neural networks, scientists have been able to identify many important and surprising differences in how we learn.

The Future of Computer Science: The Rock We Tricked Into Thinking
Explore the state of the art in computing and how the demands for energy efficient and intelligent systems is driving the creation of entirely new approaches to the problem.

The Math of Swarming Robots, Superconductors, and Slime Mold
Explore the mathematics underlying systems of interacting agents and how such systems can be analyzed using an age old scientific technique: what happens if we poke it?

Check out these programs and more on UCSB’s GRIT Talks. Over the summer the UC Santa Barbara Institute for Energy Efficiency hosted the 4th consecutive year of The UC Santa Barbara Summit on Energy Efficiency. This year focused on Materials for a Sustainable Energy Future, including topics such as; Connecting Innovation: The Utilities’ Perspective, Electrochemical Energy Storage Technologies, The Challenge of Electrical Energy Storage, Energy Efficient Information & Communications Technology, Innovations in Solid State Lighting, and Critical Materials for Energy Technologies. Over 200 attendees joined together to hear from leaders from industry, academia, national labs and government to discuss materials challenges, opportunities and the latest developments relating to key technologies impacting energy efficiency.

Opening Keynote speaker Steven Chu, Secretary of Energy ’09-’13, and Professor at Stanford University, starts the conference with the topic of

Materials Science Innovations in Energy Efficiency and Generation. Chu asserts that new materials enable newer technology, especially when coupled with better systems designed. Chu brings light to the issue of retaining intellectual property in America for future generations through our manufacturing choices, “We can not only invent things in America, it has to be made in America.”

In the field of High Efficiency Power Electronics, a panel of experts in the field gather to discuss future possibilities, and how we can enable and integrate new technologies into existing systems faster. Moderator Lisa Margonelli, Author and Journalist of New America Foundation, joins a diverse panel including; Rajeev Ram, Professor of Electrical Engineering at MIT, Hari Harikumar, VP of Advanced Technology at Ingersoll Rand, JB Straubel, Co-Founder and CTO of Tesla Motors, and Umesh Mishra, Professor of Electrical and Computer Engineering at UC Santa Barbara and CEO of Transphorm.