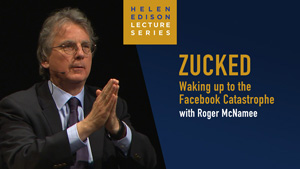 Social media has become such a ubiquitous part of our lives that it’s difficult to remember a time before Facebook, Google, Twitter, Instagram, etc. So ingrained are these platforms in our daily routines that we seldom stop to ponder their effect on ourselves, other users, and/or the larger society.

As an early financial advisor to Facebook founder Mark Zuckerberg, venture capitalist Roger McNamee is uniquely positioned to consider those effects. In conversation with San Diego Union-Tribune’s Publisher and Editor-in-Chief, Jeff Light, McNamee discusses the concerns that led to the publication of his recent book, Zucked. He starts by describing Facebook’s business model, which is predicated on enticing users to spend ever-more time on the site to maximize advertising exposure and on selling members’ data to those advertisers.

McNamee outlines the use (or misuse) of algorithms to tailor the “Facebook experience” to each user. “Likes,” targeted News Feeds, comments, online games and other features are designed to reinforce the user’s sense of belonging to a larger community, which of course serves a basic human need. This seems harmless enough on the surface, but McNamee argues that the net effect is to create a “Facebook bubble” around the user, in which already-held theories and beliefs are constantly reinforced while opinions that may challenge those beliefs are discouraged or hidden altogether. In that light it should come as no surprise that roughly 40% of adult Americans believe things that are demonstrably untrue.

More pernicious, and potentially more damaging to society, is the outsized influence wielded by social media platforms on civil discourse and the democratic process itself. A society that cannot agree on basic facts is a society that cannot function effectively. McNamee cites two momentous events, the Brexit vote in the UK and the 2016 U.S. Presidential election, as instances where Facebook and other social media were manipulated by Cambridge Analytica, the Russian and Chinese governments, and other disruptive agents in such a way as to influence the vote’s outcome. As the evidence for this manipulation steadily mounted McNamee confronted the Facebook leadership, who at that time refused to acknowledge the severity of the problem or change their practices. Thus, began McNamee’s disillusionment with social media and growing sense of alarm over what he perceived to be a threat to democracy.

Though McNamee believes this threat is very real, he is nevertheless optimistic. He points out that there is still strength in numbers, and voters can pressure legislators to protect consumer privacy by ending the unchecked (and in McNamee’s view, wholly unnecessary) “data mining” employed by the tech sector. They can also require social media platforms to make efforts to verify information before posting, at the very least by identifying the information’s true source.

McNamee also insists that we social media consumers can and must do a better job of educating ourselves. Determining which news and commentary sites are trustworthy is a good start, and McNamee notes that there are tools available to help.