Defending Against the Ravages of Disinformation 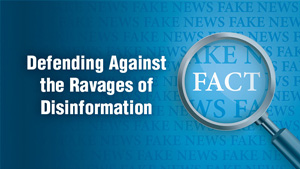 The rise of social media has given everyone with a smartphone or computer access to Facebook, Instagram or Twitter the power to broadcast their voice, their message to the masses with the touch of a button. The definition of social media is simple, interactive technology that allows the creation or sharing of information, ideas, interests, and other forms of expression via virtual communities and networks. However, with its rise in popularity, social media comes with some pitfalls, including the increased spread of disinformation.

Misinformation is defined as “false information that is spread, regardless of intent to mislead.”

Disinformation is defined as “false information which is intended to mislead, especially propaganda issued by a government organization to a rival power or the media.”

In just the past 18 months, disinformation has had direct, harmful effects on efforts to check the spread of COVID-19, on initiatives for racial justice and on the 2020 election and its aftermath. What is even scarier, is that the continued spread of disinformation has no sign of slowing or stopping. It has forced social media companies to add disclaimers to social media posts implying that the information being read may not be accurate or truthful. News organizations are employing more fact checkers to ensure the information they disseminate over the airwaves is not false.

Eminent scholars were brought together for a Berkeley Conversation to debate and explore one of the most critical questions facing our democracy: How can we counter disinformation to protect our communities without compromising America’s core principles?

The event is sponsored by the Goldman School of Public Policy, Berkeley Law and the Office of Communications and Public Affairs.

Watch Defending Against the Ravages of Disinformation.