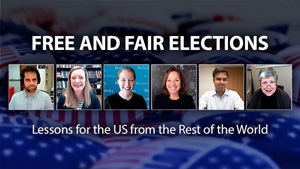 Democracy withstood the assaults of misinformation during the contentious 2020 American Presidential election but did not emerge unscathed. The Center for Security in Politics at UC Berkeley’s Goldman School of Public Policy explores what it means to have free and fair elections from three perspectives: the international comparative aspect, lessons from battleground states, and election security.

With more than 100 democracies currently in the world, there are potentially many examples of how we might improve our election process in the future. The first panel brings together a distinguished group of experts to focus on election security practices in Latin America, South Asia, and West Africa. What might the United States be able to learn from what’s being done in these regions?

Then, get firsthand accounts from a cybersecurity expert and election officials from Arizona, Michigan, and Pennsylvania. The panel of experts examined the 2020 election, current debates about voter suppression and what to expect in future electoral contests. States like Arizona and Michigan put in tremendous effort to educate voters and demonstrate the integrity of the process. They built robust election infrastructure, created resources to demystify the election process and invited people to participate in the process of keeping elections transparent.

Watch Free and Fair Elections: Lessons for the US from the Rest of the World.