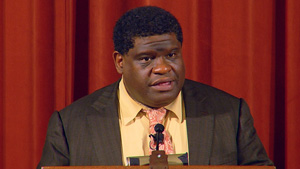 Gun control has been one of the most contentious issues in American life for the past forty years, and the debate raging shows no sign of abating. Polls consistently show a majority of Americans support stricter gun laws, yet gun control advocates are no match for the powerful pro-Second Amendment lobbies led by the National Rifle Association (NRA). Over time the NRA has evolved from its role representing sportsmen and hobbyists to an uncompromising stance opposing all firearms legislation and safeguarding the interests of gun manufacturers.

This evolution and the concerted moves to weaken existing restraints didn’t arise from a vacuum. In his Jefferson Memorial Lecture at UC Berkeley Manchester University’s Gary Younge explores America’s relationship to the gun, one that is unique among developed nations. Since the nation’s founding, firearms have played an outsized role in American history and mythology. Our heritage includes lawmen, bad men, and gunslingers of all description who shared at least one trait: uncommon skill with pistols and rifles. Our contemporary cultural mythos embraces icons such as Clint Eastwood’s Dirty Harry and Keanu Reeves’ John Wick, and the violent anti-hero is still very much with us. Younge argues that in order to understand this phenomenon one must recognize its roots in colonial rebellion and the settling of the West, not to mention the Civil War – which saw an explosive growth in private gun ownership – and the Indian Wars among others. The gun control movement, though well meaning, have routinely discounted or dismissed the powerful attractions of these historical precedents, and by doing so they’ve ceded control of the national conversation to Second Amendment absolutists. Gun control supporters have also failed to match the resources wielded by highly organized gun lobbies.

The gun control debate is largely a clash of passions. Gun enthusiasts have successfully linked gun ownership to concepts of “freedom” and “American values,” and indeed this does reflect America’s stance in the wider world. Gary Younge notes that unless and until gun control supporters can fashion an equally strong narrative supporting their views, change will be agonizingly slow, if it’s possible at all.

Watch Weaponizing Narratives: Why America Wants Gun Control But Doesn’t Have It.