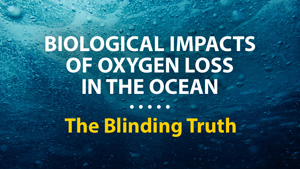 Ocean oxygen levels are changing globally as a result of both natural and human-influenced processes, and in some areas low oxygen events are becoming more common. While research on terrestrial animals has shown that low oxygen levels can affect vision – a vital function for finding food and shelter and avoiding predators – the impact of low oxygen on marine life is much less well understood.

Join Scripps postdoctoral scholar Lillian McCormick for an in depth look at how and why oxygen is changing in the ocean and how her research is providing insight into the impacts of low oxygen on vision in marine invertebrates. Learn about her stunning new research results, her plans for future investigations and what we can do about oxygen decline in the ocean.

Watch Biological Impacts of Oxygen Loss in the Ocean: The Blinding Truth. 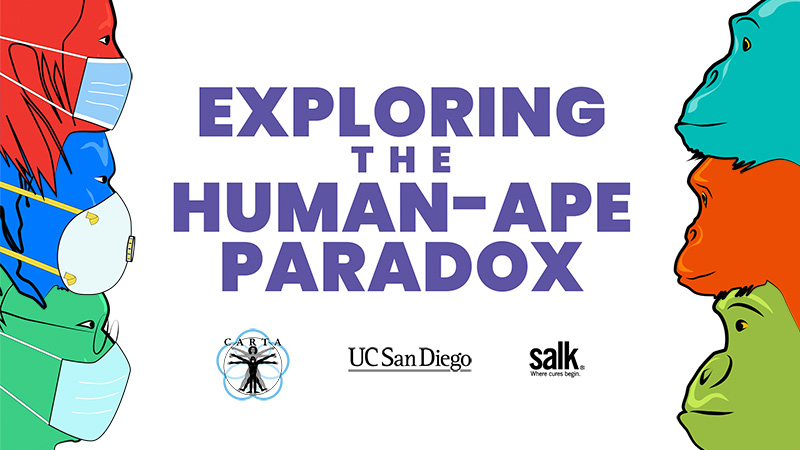 CARTA’s Fall 2020 symposium, Comparative Anthropogeny: Exploring the Human Ape-Paradox, examines humans as a uniquely evolved, “biologically enculturated,” species as juxtaposed with our closest living relatives, the “great apes” (chimpanzees, bonobos, gorillas, and orangutans). By definition, each species is unique as it represents the outcome of independent evolution. Yet, humans appear to be a remarkable outlier as we have numerous characteristics so far un-described in any other primate. Why should this be? Unlike other species, the evident animal nature of humans is interwoven with a distinctly human cultural fabric, forming the paradox of “biological enculturation”: a species that is both “biologically cultural” and “culturally biological.” In humans, “biological enculturation” is so pervasive that disentangling the cultural and biological components is impossible.

This symposium brings together experts in various disciplines from around the globe to address several important distinctly human “biologically enculturated” characteristics, both in relation to each other and in contrast to our evolutionary cousins. They explore transdisciplinary interactions and generate new, potentially unexplored, insights into uniquely-human specializations.

Given the interest in understanding our evolution, this symposium also helps organize how and in what sequence distinctly human physical, mental, social, and cultural features evolved. Such understanding may help explain the origin of our species and how it came to now directly shape the planet, giving rise to the Anthropocene, the epoch of human influence on climate and the environment. 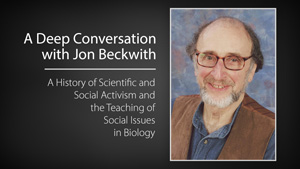 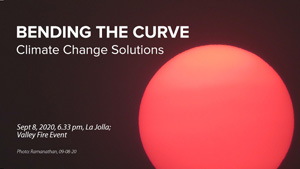 Climate change is an urgent problem that affects everything from human health and food security to immigration patterns and water resources.

With unchecked emissions of climate pollutants, there is a 50% probability for the planetary warming to cross the so-called dangerous threshold of 20C by 2050; and there is at least a 5% probability the warming can exceed a catastrophic 60C in about 80+ years.

Climate scientists study more than Earth’s changing climate. They are an integral part of coming up with solutions for both mitigating and adapting to these human-caused changes. Join world renowned scientist Ram Ramanathan for insight into a multifaceted education program, Bending the Curve, which inspires action on climate solutions. The groundbreaking program is offered at all University of California campuses and internationally. Learn how he and colleagues around the world are educating students at every level to become climate warriors. 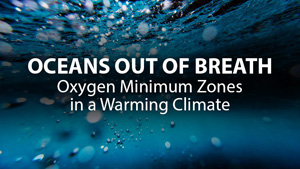 Scripps climate scientist Yassir Eddebbar takes you on an exploration of the ocean’s interior to reveal a fascinating phenomenon – oxygen minimum zones (OMZs).

Oxygen minimum zones (OMZs) are regions of the global ocean that present low dissolved oxygen concentrations. Although they represent only a small fraction of the global ocean volume, they are considered to be an important sink for fixed nitrogen, contributing 30-50% of the oceanic nitrogen removal. They are important sources of the greenhouse gases carbon dioxide (CO2) and nitrous oxide (N2O), the latter also involved in the destruction of stratospheric ozone.

Focusing on his work in the tropical Pacific, Eddebbar explains what causes OMZs, how they are likely to change in response to climate change, and their potential to impact marine ecosystems and fisheries as climate warms.

Watch Oceans Out of Breath: Oxygen Minimum Zones in a Warming Climate.