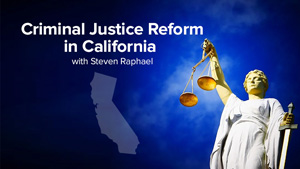 For decades California’s incarceration rate mirrored that of the nation, increasing five-fold between the early 1970s and the mid-2000s. Since 2010 California has slowly turned away from mass incarceration through a series of criminal justice reforms, including changing criminal sentencing and law enforcement practices to reduce prison populations.

What has California done right in this transformation, and where has it fallen short? What would a truly just criminal justice system look like? UC Berkeley’s Steven Raphael looks at the last decade of prison reform including reducing overcrowding, the impacts of proposition 47 and the effects of racial disproportionality in criminal justice involvement.

Raphael is a Professor of Public Policy at UC Berkeley and holds the James D. Marver Chair at the Goldman School of Public Policy. His research focuses on the economics of low-wage labor markets, housing, and the economics of crime and corrections. His most recent research focuses on the social consequences of the large increases in U.S. incarceration rates and racial disparities in criminal justice outcomes. Raphael also works on immigration policy, research questions pertaining to various aspects of racial inequality, the economics of labor unions, social insurance policies, homelessness, and low-income housing.