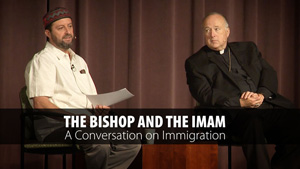 Since its inception in 1985 the Eugene M. Burke Lectureship on Religion and Society at UC San Diego has sponsored more than 70 public lectures in which scholars, theologians, and religious practitioners of various faiths address critical issues in the relationship between religion and society.

One such pressing issue is immigration. The first two decades of the 21st century have seen a sharp rise in the number of global refugees as individuals and families flee war, famine, disease, ethic and political strife, economic hardship, natural disasters, and the effects of climate change. As the number of asylum seekers and other immigrants grows, so too do calls in host countries to deny them entry. Here in the United States both legal and undocumented immigrants face an increasingly hostile political climate. In this installment of the Burke Lectureship two prominent religious leaders, Bishop Robert McElroy of the Roman Catholic Diocese of San Diego and Imam Taha Hassane of the Islamic Center of San Diego, discuss their respective faiths’ views on immigration while seeking to forge a common path forward.

Both men assert that immigration poses a moral challenge as well as a legal problem, citing the emphasis in both Christianity and Islam on fellowship and fair treatment of strangers. Imam Hassane stresses the importance of hospitality in Islamic tradition, while Bishop McElroy outlines the Catholic Church’s doctrines concerning social justice, especially as they pertain to the poor and the underprivileged. In both instances the Imam and the Bishop believe that giving aid to immigrants is a moral imperative that transcends political dogma. However, neither man is naïve; both understand the difficulties of preaching and implementing a faith-mandated moral course in the face of widespread popular opposition fueled by demagoguery.

How then to proceed? As Imam Hassane points out, the challenge is not merely to change men’s minds, but their hearts. To do less is to fail the moral test. Both the Imam and the Bishop believe that open, honest dialogue is key, not merely with fellow believers but those advocating opposing views, as well as with those in power who are in a position to effect change. Also vital to the effort are public expressions of solidarity with immigrants in the form of peaceful demonstrations, petition drives, and questioning of public officials and policies. The two religious leaders point out that a faith that is expressed only in words and not deeds is a thin faith at best.

Watch — The Bishop and the Imam: A Conversation on Immigration – Burke Lectureship on Religion and Society