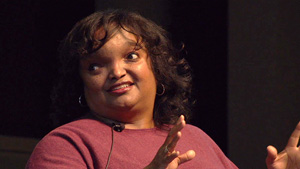 “If you don’t want your children to know the truth about life don’t send ’em to the theater to see Moms, ’cause I’m gonna tell them THE TRUTH, hear?”
— Moms Mabley

Comedian Jackie “Moms” Mabley became a familiar figure to television audiences in the 1960’s and early 1970’s. Born Loretta Mary Aiken in 1894, Mabley was a veteran of the segregated vaudeville “Chitlin’ Circuit” (aka Theater Owners Booking Association) who held a residency at Harlem’s Apollo Theater before breaking into the white mainstream in the early Sixties. She released more than a dozen albums, gave a sold-out concert at Carnegie Hall, and made numerous appearances on the Ed Sullivan Show, Smothers Brothers Comedy Hour, Tonight Show, Merv Griffin Show, and other popular programs of the day. Mabley developed her distinctive persona – a toothless, bedraggled woman in a faded house dress and rumpled hat – in the 1920’s and refined it throughout her career.

This sly persona was one of the factors that enabled Mabley to perform what we now call transgressive comedy – that is, comedy that addresses a range of taboo topics. In Mabley’s case these subjects included race, gender politics, and sexual orientation. It was risky enough for white comedians such as Lenny Bruce to feature such material; for a black woman and avowed lesbian to achieve mainstream success while doing so was nothing short of transformational. Like Dick Gregory, Redd Foxx, and other cutting-edge African-American humorists of the time, Moms Mabley was less concerned with “translating” her material for the comfort of white audiences than with expressing essential truths. As she once told an audience, “I don’t know no jokes, but I do know some facts.”

Since her death in 1975 Moms Mabley has gradually receded in the cultural landscape, and her work is now all but forgotten by the general audience. In the episode of the “Women in Comedy” series devoted to Mabley, Bambi Haggins (Film & Media Studies, UC Irvine) makes the case for Mabley’s influence on her contemporaries and the generation of comedians that followed, while arguing that Mabley should not be forgotten though we’re three generations removed from her heyday. Haggins was a consultant for the HBO documentary “Whoopi Goldberg Presents Moms Mabley,” and she shares Whoopi’s view that Mabley helped to pave the way for Richard Pryor, Wanda Sykes, Dave Chappelle, and others, including Whoopi herself. Further, Haggins maintains that many up and coming young comedians who perform socially-conscious material can trace their lineage back to Mabley, even though they may not be overtly aware of Mabley’s influence. In this role as a progenitor Mabley’s nickname, Moms, is an apt one.