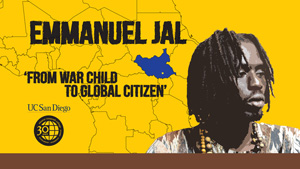 “I say I survived for a reason: to tell my story. I believe that…Music is powerful. It is the only thing that can speak into your mind, your heart and your soul without your permission.”
– Emmanuel Jal

The Second Sudanese Civil War from 1983 to 2005 was one of the longest and bloodiest civil wars on record, yet it barely registered in Western media. The war resulted in the deaths of roughly two million people and the repeated displacement of over four million others in southern Sudan alone, constituting one of history’s largest refugee crises. Among the atrocities committed during the war were slavery, rapes, mutilations, mass killings, and the forced enlistment of children as soldiers by all sides.

Emmanuel Jal was one such child soldier. Born in what is now South Sudan, Jal was a young child when the civil war broke out. After his father joined the rebel army (SPLA) and his mother was killed by loyalist soldiers, Jal joined the thousands of Sudanese children travelling to Ethiopia, hoping to escape the conflict and find education and opportunity. Along the way, however, many of the children, Jal included, were forcibly recruited by the SPLA and taken to military training camps where they were taught to kill, in Jal’s words, “mercilessly and efficiently.”

For the next several years Jal and his comrades fought with the SPLA, first in Ethiopia and then back in Sudan, until the fighting and deprivations became unbearable. Jal and some of his friends ran away, and for three months they were constantly on the move, stealing food and dodging roving patrols. Eventually Jal met a British aid worker who adopted him and smuggled him to Kenya, where he attended school. It was in the slums of Nairobi that Jal became a community activist. He also discovered hip-hop and the power of the spoken word; singing and rapping became a form of therapy to ease the pain of his experiences, and his life’s course was set. Over time Jal developed a unique form of hip-hop, seemingly conventional in form but layered with African beats and sung/chanted over African-inspired choruses.

Unlike many of his American counterparts, Jal sees hip-hop as a powerful vehicle to lobby for social justice and political change in a positive manner, rather than as a method of pursuing street credibility. His raps and spoken word pieces emphasize unity and common humanity as motivators for young people and weapons in the fight against the scourges of ethnic and religious divisions, such as those that plague his homeland. This hopeful outlook, combined with his many humanitarian activities, dovetails neatly with the goals of UC San Diego’s Eleanor Roosevelt College, and marks Jal as a suitably inspirational figure to help celebrate the College’s 30th Anniversary.

His dynamic performance is by turns thought-provoking and uplifting, at times almost somber, but also leavened with humor and, yes, with fun. As Jal himself puts it, “Life without fun is no life at all,” a remarkable perspective from one who has suffered much but has refused to give in to bitterness or cynicism.

Watch From War Child to Global Citizen with Emmanuel Jal.