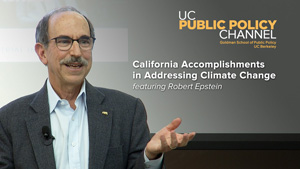 California has made huge strides in combating climate change, but there is still a long way to go. Back in 2006, state lawmakers passed AB 32, also known as the Global Warming Solutions Act. It set a goal of getting greenhouse gas emissions down to 1990 levels or lower by 2020. The state managed to reach that goal four years early. Robert Epstein, co-founder of Environmental Entrepreneurs, discussed the success of AB 32, and what needs to happen next, during a lecture at UC Berkeley’s Goldman School of Public Policy.

Epstein begins with a look at what worked. Some solutions you might expect, like renewable energy, increased efficiency and long-lasting political support. Other factors may come as a surprise. The economic downturn helped, because people use fewer resources when they have less money. We also got some assistance from mother nature, with heavy rains in 2016 that boosted hydroelectric power generation. But, even though California has made great achievements in lowering greenhouse gas emissions, the state must make even deeper cuts to avoid the worst effects of climate change. A new version of AB 32 aims to get emissions 40% below 1990 levels by 2030.

Epstein says California has much of the technology and policy in place to reach that 40% goal, but some aspects of the plan are unclear. He says we’re on pace to meet 50% renewable energy 10 years early, and have a solid track record when it comes to appliance and building standards. He thinks it’s likely we’ll figure out how to manage methane and increase energy storage. But, he sees big hurdles when it comes to reducing transportation emissions, cap and trade reductions, and management of both forests and land used for agriculture.

Despite those challenges, Epstein is optimistic California can rise to the occasion and be an example to the world of how to combat climate change. He even has some ideas on how to overcome each major obstacle, and how the oil industry might be able to help.