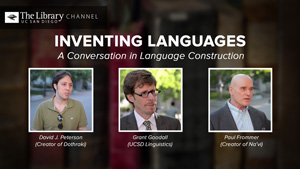 It’s a misuse of terms to say that we have a natural language; languages are arbitrary and conventions of peoples by institution. – François Rabelais

Constructed languages, or conlangs, are popular features of many science fiction and fantasy tales. Examples include Barsoomian (Edgar Rice Burrough’s John Carter series), Elvish and Khuzdul (Tolkien’s Lord of the Rings trilogy), Klingon (Star Trek), Na’vi (James Cameron’s Avatar), and Dothraki and Valyrian (George R.R. Martin’s A Song of Ice and Fire). Thanks to the efforts of dedicated – some might say obsessive – fans, these invented languages occasionally slip the bonds of their native genres, as witnessed by Klingon translations of Shakespeare and the Bible.

Not all conlangs have roots in fantastic literature. The most widely-spoken “auxiliary language,” Esperanto, was created in the late 19th century by a Polish ophthalmologist, and was intended to be an easy and flexible second tongue that would foster peace and international understanding. UC San Diego Linguistics Professor Grant Goodall was fascinated by languages at an early age, and quickly found himself drawn to Esperanto; through his study of Esperanto he developed an interest in other conlangs.

In addition to Goodall’s remarks about his linguistic adventures in Inventing Languages, two of the most popular contemporary conlangs, Na’vi and Dothraki, are discussed by their creators. Paul Frommer was tasked by Avatar director James Cameron to create a language for his science fiction epic set on an alien world. Frommer describes a process which entailed setting certain rules for the new language, dubbed Na’vi, which were drawn from various Earthbound tongues, including English, the Romance languages, and several Eastern European languages. The primary challenge was to create a language that seems sufficiently alien to our experience, yet could be learned quickly by decidedly human actors portraying the language’s native speakers while also lending itself to a vocabulary that could be expanded on short notice.

David Peterson, co-creator of the Dothraki language used in Game of Thrones, faced a somewhat different set of challenges since the basics of Dothraki were established in the novels upon which the series is based (complete with translations). Peterson’s first task was to reconcile inconsistencies in spellings across various books, followed by establishment of certain rules of grammar and pronunciation based on common usages in various modern languages – key elements in Peterson’s ability to form new Dothraki vocabulary upon demand. Like Frommer’s Na’vi, Peterson’s Dothraki needed to sound exotic while retaining just enough familiarity for actors to learn and speak the language convincingly.

In recent years conventions, workshops, seminars, websites, and user groups have sprung up around fictional languages, including Na’vi and Dothraki, as fans seek an immersive experience based on their favorite novel, film, or TV series. Thus far none have yet achieved the international prominence of Esperanto, but devotees are convinced that it’s only a matter of time.